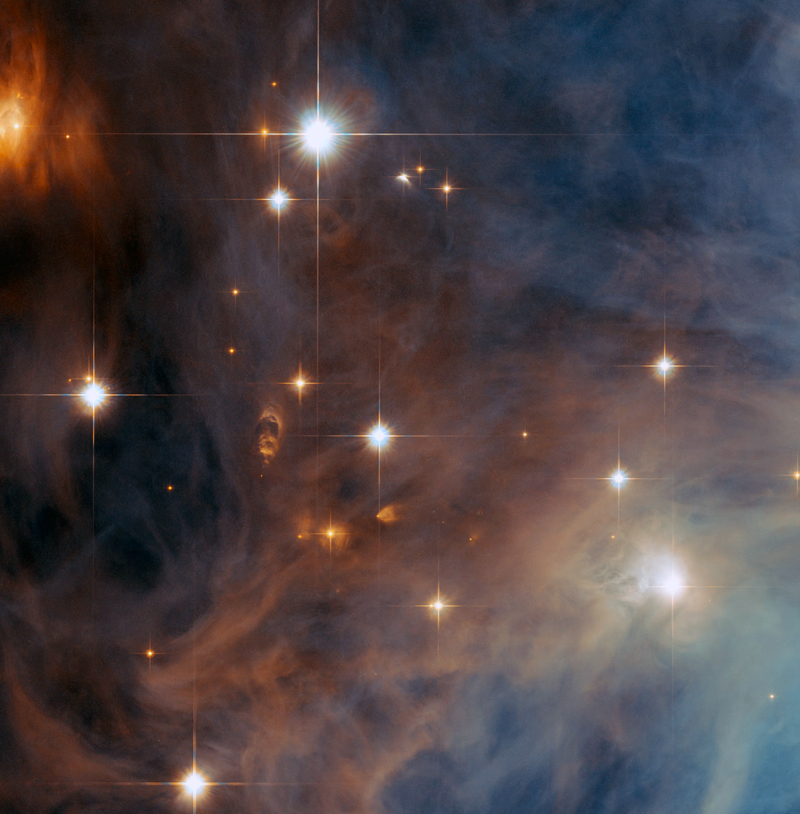 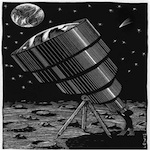 The NASA/ESA Hubble Space Telescope has taken a close-up view of an outer part of the Orion Nebula’s little brother, Messier 43. This nebula, which is sometimes referred to as De Mairan’s Nebula after its discoverer, is separated from the famous Orion Nebula (Messier 42) by only a dark lane of dust. Both nebulae are part of the massive stellar nursery called the Orion molecular cloud complex, which includes several other nebulae, such as the Horsehead Nebula (Barnard 33) and the Flame Nebula (NGC 2024).

The Orion molecular cloud complex is about 1400 light-years away, making it one of the closest massive star formation regions to Earth. Hubble has therefore studied this extraordinary region extensively over the past two decades, monitoring how stellar winds sculpt the clouds of gas, studying young stars and their surroundings and discovering many elusive objects, such as brown dwarf stars.

This view shows several of the brilliant hot young stars in this less-studied region and it also reveals many of the curious features around even younger stars that are still cocooned by dust.

This picture was created from images taken using the Wide Field Channel of Hubble’s Advanced Camera for Surveys. Images through yellow (F555W, coloured blue) and near-infrared (F814W, coloured red) filters were combined. The exposure times were 1000 s per filter and the field of view is about 3.3 arcminutes across.

This website uses cookies to improve your experience while you navigate through the website. Out of these, the cookies that are categorized as necessary are stored on your browser as they are essential for the working of basic functionalities of the website. We also use third-party cookies that help us analyze and understand how you use this website. These cookies will be stored in your browser only with your consent. You also have the option to opt-out of these cookies. But opting out of some of these cookies may affect your browsing experience.
Necessary Sempre ativado
Necessary cookies are absolutely essential for the website to function properly. These cookies ensure basic functionalities and security features of the website, anonymously.
Functional
Functional cookies help to perform certain functionalities like sharing the content of the website on social media platforms, collect feedbacks, and other third-party features.
Performance
Performance cookies are used to understand and analyze the key performance indexes of the website which helps in delivering a better user experience for the visitors.
Analytics
Analytical cookies are used to understand how visitors interact with the website. These cookies help provide information on metrics the number of visitors, bounce rate, traffic source, etc.
Advertisement
Advertisement cookies are used to provide visitors with relevant ads and marketing campaigns. These cookies track visitors across websites and collect information to provide customized ads.
Others
Other uncategorized cookies are those that are being analyzed and have not been classified into a category as yet.
SALVAR E ACEITAR